Elcomsoft has just released a major update of Elcomsoft Distributed Password Recovery (EDPR), adding a number of features, and fixing a bunch of issues users complained about. Version 4.0 now allows for touchless, fully automatic distribution of custom dictionaries across the agents, greatly improves support for large jobs with long queues, and fixes the issue of random disconnects experienced by some users.

If the network has agents running on computers without a dedicated video card, we have great news for you. EDPR 4.0 adds GPU acceleration support on Intel’s built-in graphic chips such as Intel HD Graphics, UHD Graphics and Intel Iris. This alone can double or triple the performance on those computers without a dedicated GPU, but there’s more to it than just supporting the less powerful workstations. Thanks to asynchronous heterogeneous computing support we’ve added in one of the previous updates, EDPR 4.0 can now use the extra power delivered by built-in Intel GPU cores in addition to dedicated video cards, squeezing that last bit of performance out of your existing hardware.

In addition to Intel GPU’s, Elcomsoft has significantly improved the speed of attacks accelerated with last-generation NVIDIA boards. Thanks to internal optimizations, the switch to the latest CUDA 9 and optimizations for NVIDIA Volta, Elcomsoft has been able to nearly double the speed for a large number of formats.

Instead of the Disk Encryption Info tool, the user will receive an evaluation version of Elcomsoft Forensic Disk Decryptor allowing to attack TrueCrypt, Bitlocker, PGP Disk, FileVault, and DMG encryption (full disk encryption and containers). You can read about Elcomsoft Forensic Disk Decryptor here. There’s no need to be frightened with the “evaluation version” tag, as the core functionality (extracting hashes required to attack encrypted disks, volumes or images) is free and unlimited. It’s the extra functionality you can unlock later on if you ever need to mount or decrypt the container using the key or password recovered with EDPR.

The user will no longer need to launch the main app to extract hashes out of password managers’ databases. Elcomsoft Hash Extractor is a new portable tool to help extracting password hashes from the many supported password managers. This tool replaces functionality previously built into the main package, allowing for better portability and much easier extraction of password hashes from live systems. For KeePass manager, Elcomsoft has added support for ChaCha20, AES-KDF (KDBX4), and Twofish (KeepassXC) encryption.

Elcomsoft Distributed Password Recovery employs a revolutionary, patented technology to accelerate password recovery when a compatible NVIDIA or AMD graphics card is present in addition to the CPU-only mode. Currently supporting all GeForce boards from 400 to 1000-series GPUs including (as well as NVIDIA Quadro and Tesla) and AMD Radeon HD from 5000-series to R2/R4/R7/R9 GPUs, the acceleration technology offloads parts of computational-heavy processing onto the fast and highly scalable processors featured in the latest graphic accelerators.

Unlike competition, Elcomsoft Distributed Password Recovery is not ‘virtually’ or ‘practically’ linear in scalability. By doubling the number of PCs working on a password, you cut the time required to recover a password by half.

By only transferring the bare minimum of information over the network, Elcomsoft Distributed Password Recovery allows for massively parallel operation, and scales linearly to as many as 10,000 workstations with no scalability overhead.

Elcomsoft Distributed Password Recovery enables distributed work over the LAN, Internet, or both. Minimum bandwidth requirements ensure no scalability overhead even for the slowest connections.

Industry Certified, Used by the Government

Password recovery software by ElcomSoft is being used by numerous government agencies and forensic organizations all over the world. 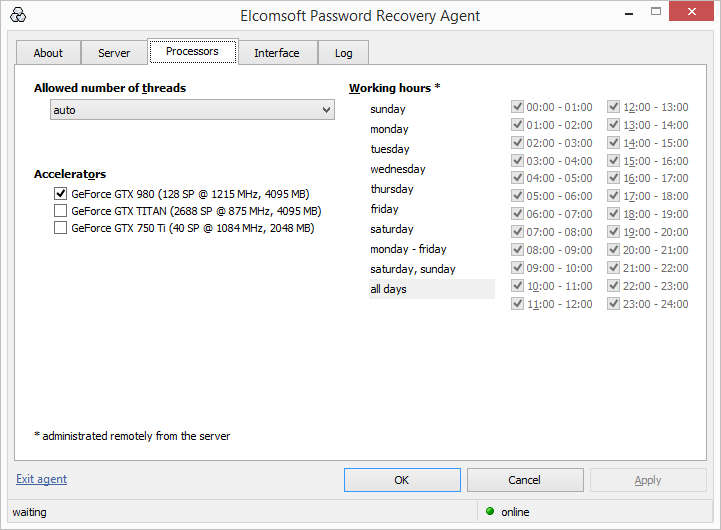